Difference Between UPS and Inverter 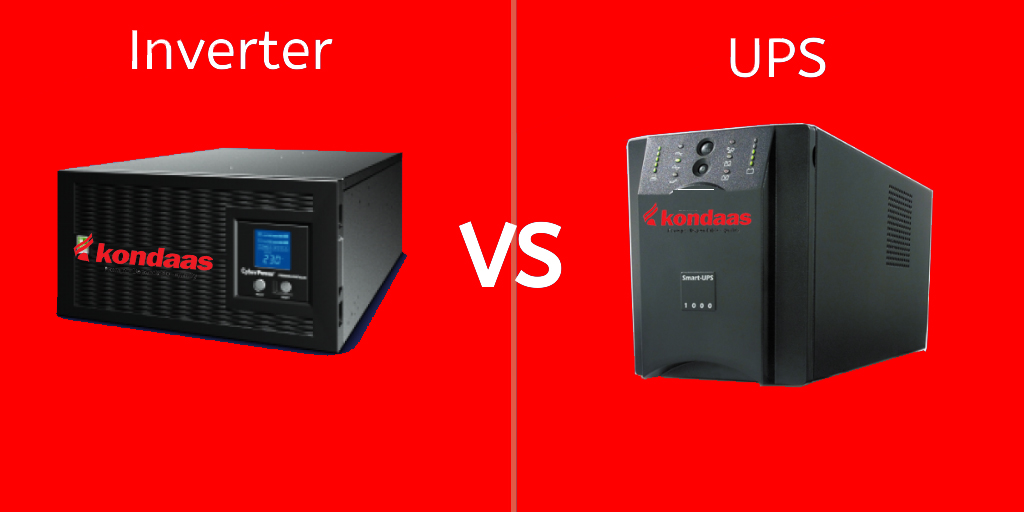 UPS stands for uninterruptible power supply. As the name suggests, it is used to keep devices from disconnecting during a power outage. This system is primarily used in computers to provide enough power for computers to store data and safely shut down in the event of a sudden power failure. UPS consists of a rectifier that converts AC power into its DC power to charge the battery. The battery is connected to an inverter that converts direct current to alternating current. A controller is provided to control the behavior of the system. This is the difference between UPS and inverter.

Kondaas offers UPS solutions that can provide power backups ranging from 10 Mins to 8 hours depending on the area of the customer’s application/requirement. As such, it is primarily for IT systems and electronic equipment that can be damaged by sudden power outages.
Inverter
Inverters power electronic devices. The main purpose of these devices is to convert direct current to alternating current. In an inverter, AC power is taken from the AC grid and converted to his DC power by a rectifier.
This converts the battery to direct current charges to the battery. Industrial and domestic systems run on AC power, so the DC power from the battery is converted to AC power by an inverter. During a power outage, the inverter is powered by the battery to power the electrical equipment. These systems are used in homes/offices/industries to maintain power after power outages. No external power supply is required to operate the inverter.

Key Differences Between UPS and Inverter

The disadvantage of UPS is that since the battery is continuously being charged and discharged even when there’s no power cut. Because of this, the battery will wear out 4-5 times quicker than the inverter battery.
Compared with an inverter, UPS is cheaper. There are different types of inverters and power inverters and they are offered at competitive prices.
Factors to consider when purchasing them include backup time, capacity, charging time, power requirements, charging (the amount of charge in a fully charged cell), and warranty.
Another difference between the two devices is that the inverter has a rectifier to provide backup power to the system, and the inverter converts the direct current into an alternating current.
The main function of an inverter is to store electrical energy while an inverter converts alternating current into direct current.
During a power failure, UPS immediately switches from the mains to the battery while the inverter has a time delay.
UPS provides backup power, and the inverter provides backup power for the electronics.
Offline, Online, and Line Interruptive are the types of UPS whereas the inverter is of two types, i.e., the standby inverter and the Grid tie inverter.
The inverter is directly connected to the home appliance while the inverter is first connected to the battery and then to the appliance’s circuit.
The UPS is directly connected to the home appliances whereas the inverter is first linked to the battery and then attached to the appliance’s circuit.
The UPS is more expensive compared to the inverter.
The rectifier and battery are inbuilt into the circuit of the UPS. The rectifier converts the AC into DC and stores the energy in a battery whereas the inverter has an external battery for storing the DC power.
UPS provides a backup supply for a very short duration whereas the inverter supplies the power for an extended period.
UPS does not have voltage fluctuation because its input is independent of the output supply whereas the inverter has voltage variation.
Though designed with the same aim to substitute electricity, inverters, and UPS differ in their working principle, type of application, and power sources. UPS has complex wiring and is expensive. Whereas generators and inverters are less expensive.
UPS contains built-in batteries whereas inverter batteries are external. While UPS is directly plugged into appliances, inverters are connected to the main power line of the household to send power to appliances. Though the working of inverter and UPS are similar, the main difference is the time taken by them to switch ON.

After detecting an interruption in power UPS is switched ON immediately whereas the inverter uses some delay to switch ON. Thus UPS is used for sensitive systems such as a computer that cannot afford sudden power loss.

Inference
In our daily lives, we are heavily dependent upon appliances that run on electricity such as fans, lights, Laptops, AC, fridges, and so on. Inverters and UPS are used to support power supplies when there is a power outage either from the Supply Authority or Generator House.
Typically, a UPS is a device that helps in keeping an electrical system for a few minutes whenever there is a power failure. It makes use of a battery which helps to continue power when there is a power outage.
While an Inverter is an electronic gadget that is used to supply power by converting the direct current of a battery into an alternating current. Whenever there is a power cut, the electricity supply to these appliances is cut off and they stop working. However, if you have a backup supply in the form of devices such as UPS or inverter, you have ensured an uninterrupted supply of power to your appliances and will not be upset with power cuts. The major difference however between these two devices is that the Inverter is not able to provide any supply but through a DC source only.
If you need an extended backup power supply for your home or business, or if you want to keep sensitive equipment protected at all times, contact Kondaas Automation today. We stock the best UPS and inverters from famous brands.

Previous Post
Difference between Online and Offline UPS
Next Post
How do I clean my Solar Panels?